Pick up the new iPad and suddenly its clear. You re actually touching your photos, reading a book, playing the piano. Nothing comes between you and what you love. To make that hands on experience even better we made the fundamental elements of iPad better ? the display the camera the wireless connection. All of which makes the new third-generation iPad capable of so much more than you ever imagined.

Pick up the new iPad and suddenly, it,s clear. You,re actually touching your photos, reading a book, playing the piano. Nothing comes between you and what you love. To make that hands-on experience even better, we made the fundamental elements of iPad better - the display, the camera, the wireless connection. All of which makes the new, third-generation iPad capable of so much more than you ever imagined.

The best display ever on a mobile device.
Everything you do with iPad, you do through its large, beautiful display. And when the display is better, the entire iPad experience is better. The Retina display on the new iPad features a 2048-by-1536 resolution, 44 percent greater color saturation, and an astounding 3.1 million pixels - in the same 9.7-inch space. That,s four times the number of pixels in iPad 2 and a million more than an HDTV. Those pixels are so close together, your eyes can,t discern individual ones at a normal viewing distance. When you can,t see the pixels, you see the whole picture. Or article. Or game. In ways you never could before.

The new iPad has a million more pixels than an HDTV.

Breakthrough technology. For a breakthrough display.
In order to create a display with four times the pixels, we had to design it in a completely new way. You see, every pixel in a display has multiple signals telling it when to light up. But when you have a lot of pixels and a lot of signals on the same plane, signals get crossed and image quality suffers. To make sure everything on the new iPad looks crystal clear, Apple engineers elevated the pixels onto a different plane - separating them from the signals. It,s technology that,s breakthrough. Just like the new iPad itself.

The A5X chip with quad-core graphics drives four times the pixels of iPad 2 yet it delivers the same smoothness and fluidity iPad is known for. Even with all that extra oomph, the new iPad still gets an amazing 10 hours of battery life.

More power on display.
The Retina display on the new iPad wouldn,t be possible without the new and powerful A5X chip. It drives power to every one of the 3.1 million pixels in the display. And its quad-core graphics processing makes everything you do on iPad feel incredibly responsive. From the little things like swiping, scrolling, and pinching to the big things like editing photos in the new iPhoto, applying filters and transitions in iMovie, and, of course, playing games.

Instant on. Touch and go.
You use your iPad all the time. A few minutes here, an hour or so there. And each time you press the Home button or open the Smart Cover, it,s ready to go. Instantly. That,s the work of flash storage. It,s fast and reliable, so you can get to your apps and do whatever you need to do, pronto.

Battery life spared.
The new iPad features a Retina display with four times the pixels of iPad 2 and quad-core graphics. How much of an effect does that have on battery life? Almost none. You still get up to 10 hours of power to read, watch, play, write, and create whatever you want, all you want.

Shoot 5-megapixel still images.
The 5-megapixel iSight camera features a backside illumination sensor that captures great-looking pictures whether by sunlight or candlelight. Autofocus, tap to focus, and tap to set exposure functions mean every photo you take instantly becomes a frameworthy gem. And with built-in face detection that automatically balances focus and exposure across up to 10 faces, there,s more room for more grins. So everyone look at iPad and say Cheese.

Record HD video in full 1080p.
Sometimes life takes you by surprise. You,re reading a best seller on your iPad waiting for the morning train when you spy a gifted performer on the platform. Or you,re browsing the web on the couch when your dog trots by wearing your daughter,s tutu. The iSight camera on the new iPad lets you capture all these unpredictable, beautiful, and hilarious moments. In 1080p HD, no less. And with automatic video stabilization, your recording is free of bumps and shakes. Which is a big advantage when you,re laughing uncontrollably.

It?s all in the lenses.
Megapixels matter. But the quality of a photo is determined by other things, too - like the camera,s optics, image signal processor, and software. The iSight camera uses advanced optics to give you the best picture possible. With an F/2.4 aperture and a five-element lens, it captures light efficiently to produce a sharper overall image. And the hybrid infrared filter - typically reserved for expensive SLR cameras - keeps out harmful IR light for more accurate, uniform colors.

Built with the latest in wireless technology, the new iPad lets you connect to fast data networks around the world - up to 4G LTE.

World ready. And very well connected.
You use your iPad a lot, so you want it with you wherever you go. The new iPad offers the most comprehensive support for networks around the world. It,s designed with cellular antennas that access a larger frequency spectrum. That means you can get online almost anywhere you are - whether you,re on AT&T or Verizon. You can even pop in a local SIM card to get a connection when you,re traveling. Learn more about Wi-Fi and 4G

Really really fast is your only option.
The new iPad supports fast cellular networks the world over - up to 4G LTE.2 So you can browse the web, stream content, or download a movie at blazing-fast speeds. It also works on GSM/UMTS worldwide network technologies including HSPA+ and DC-HSDPA - the fastest 3G networks out there. You,ll see downlink speeds up to 42 Mbps with DC-HSDPA and up to 21.1 Mbps with HSPA+.

iPad as a personal hotspot.
Now for the first time, you can share the high-speed data connection on your iPad. If your carrier supports it, iPad can act as a personal hotspot for connecting up to five devices - such as a MacBook Air, an iPod touch, or another iPad - over Wi-Fi, Bluetooth, or USB.

The world,s most advanced mobile operating system.
iOS is the magic behind iPad. It lets you see and do everything using Multi-Touch. It includes all the powerful, innovative, and fun built-in apps you use every day, many times a day. It,s the preferred choice for app developers. And it,s yet another reason no other device comes close to iPad. Learn more about iOS

Your content.
On all your devices.
iCloud stores your music, photos, apps, mail, contacts, calendars, documents, and more and wirelessly pushes them to all your devices.4 So if you buy a song, take a photo, or edit a calendar event on your iPad, iCloud makes sure it appears on your Mac, iPhone, and iPod touch, too. You don,t have to do a thing. Learn more about iCloud

Talking is the new typing.
Write an email. Send a text. Search the web. Or create a note. And do it all with only your voice. Instead of typing, tap the microphone icon on the keyboard. Then say what you want to say while your iPad listens. Tap Done and, just like that, your spoken words become written words. Dictation also works with third-party apps, so you can do things like update your Facebook status or share a thought on your Twitter feed.

Apps for iPad aren,t like anything else. That,s because every app - 200,000 and counting - is designed to work with iPad features like the beautiful 9.7-inch screen, Multi-Touch, the accelerometer, the gyroscope, and more.

Over 200,000 apps to choose from.
The App Store is home to over 200,000 apps and counting - all made just for iPad. And many of them are free. You buy apps from the App Store using the same Apple ID you use to buy music from iTunes. Find an app you like, tap to buy it, and it starts downloading instantly. iPad lets you know when updates are available, so your apps are always current.

Apps made just for iPad.
An app that,s made for iPad is genuinely made for iPad. That means it,s specifically designed to take advantage of the way iPad works. Need proof? Check out Apple,s beautiful iPhoto app on the new iPad. It,s just one of thousands of apps that let you do things with iPad you never thought possible. With iPhoto in the picture, the iLife family of apps for iPad - including GarageBand and iMovie - is complete.

More than a way to protect iPad from dust and scratches, the iPad Smart Cover can wake and sleep iPad with a simple open and close. It even folds back and instantly turns into a handy little stand.

Whether it,s the new album you bought, photos of your Barcelona escapade, or an HD movie,
AirPlay lets you stream what,s on your iPad straight to your speakers and HDTV. 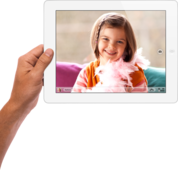 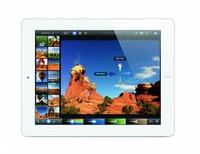 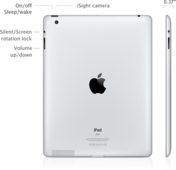